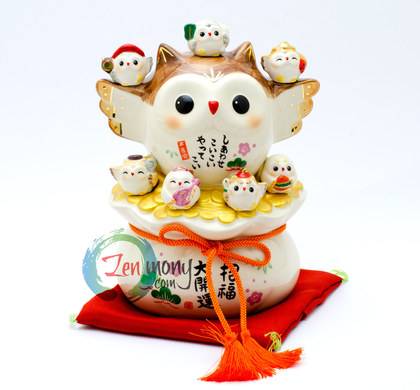 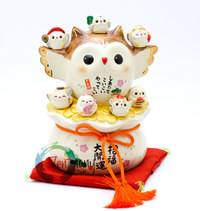 ★This good-luck owl ceramic okimono (Japanese traditional house decoration) is believed to invite happiness and money★In Japanese word "fukuro" (owl) is homonymous to the phrase "no suffering". Also the first part of this word, "fuku" is homonymous to the word "wealth" ★kijyou daikichi★開運！(kaiun) 招福！(shofuku)吉祥(kichijo)！Perfect for personal use or as a present or souvenir.

Besides the big owl in the center we also have here seven smaller owls representing seven Japanese deities of luck and happiness:

Ebisu is believed to bring luck to the trade and farming.

Daikokuten is originaly a hinduistic deity Shiwa. It is said it controlls food supplies and wealth.

Bishamonten is also originally a hinduistic deity - Vaisravana, imported into Japan through Buddhism.

Benzaiten is one of the deities - protectors of Buddhism. Originally it is a hinduistic deity Saraswaty - the goddess of knowledge, music, arts and science.

Hotei is a legendary Chinese Buddhist monk. He is always depicted carrying a bag.