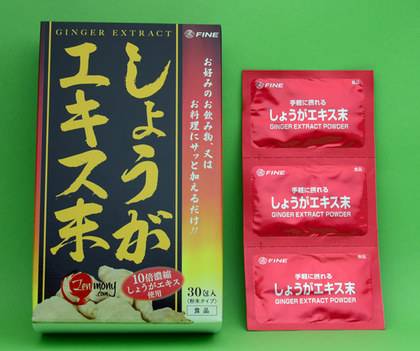 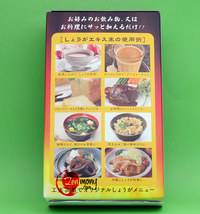 From ancient times, ginger, which is originally from the Asia tropics, has been cultivated, used as a spice and as an ingredient in several medicines in India, Southeast Asia and China. Ginger has been used for thousands of years to cure gastric pain and as an antidiarrheic medicine. In the 14th century ginger was introduced to Europe. Following pepper, it was considered one of the most precious of the spices. Ginger has an anti-histamine effect, which lessens the symptoms of a pollen allergy, and it has been attracting the attention of many researchers. Gingerol, a compound contained in ginger, is known to inhibit the production of IgE antibodies, and is thus considered to be effective against allergies. Ginger is also known for its ability to warm up our bodies and regenerate natural heat by stimulating the metabolism. Ginger extract used to make this product was concentrated 10 times!

Here are eight ways this product could be used: