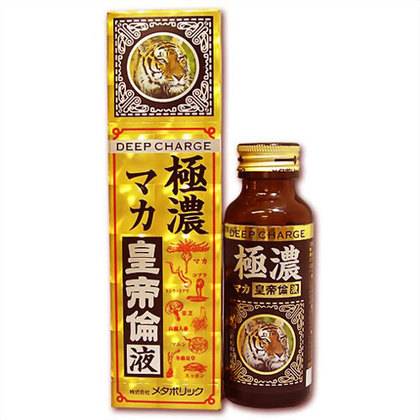 Maca is a plant growing on the highlands of the Peruvian Andes at over 4000 meters, capable of enduring harsh environments. This plant was introduced to Japan Long ago, and is now being widely used for its health effects.

Tongkat ali is a shrub in the family Simaroubaceae that originates in the tropical rainforests of Southeast Asia, and it is known by the name “Ali’s walking stick,” as its root grows so large it can be used as a walking stick. It has long been seen as beneficial when eaten as an ingredient for raising male vitality. Tongkat ali is so popular in Malaysia that tongkat ali nutritional drinks are available even at convenience stores, and the ingredient is famous enough that every man knows about it.

Reishi (Lingzhi) is a mushroom that grows wild on the trees and stumps of high-humidity mountain districts and is a type of bracket fungus.

If the lion is the king of beasts, then the cobra is the king of snakes. It is said the large ones are poisonous enough to bring down even an elephant.

Pit viper is perfect as a nutritional supplement for men. It has been consumed regularly for nutritional purposes in both food and alcoholic drinks for as long as 1500 years in China.

Asian ginseng is a valuable plant, also known as “the root of life,” which from time immemorial has been used for maintaining good health.

Caterpillar fungus is a type of mushroom that hijacks insect bodies in the winter and grows rapidly in summer, coming up out of the ground like grass.

Known for its tenacious bite, softshell turtle is a nutritional supplement for men and women of all ages, and it is a famous ingredient in gourmet cuisine. It is recommended for maintaining a high level of effort all the time.