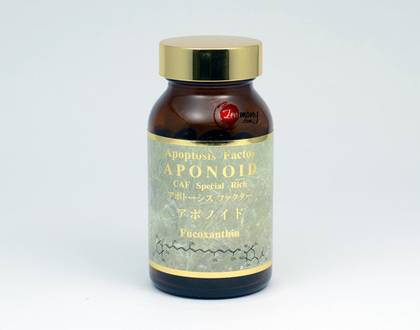 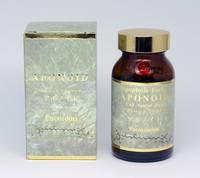 This product contains high concentration, low-molecular fucoxanthin with CCKs, a new and extraordinarily powerful highly concentrated, low-molecular substance. Contains 591mg of high concentration fucoxanthin for 100g of the product. Also containing groundbreaking Ascophyllum+, this is the launch of the most powerful high-quality supplement in condensed liquid soft capsules. At least 10 years have passed since fucoidan made its public debut. In recent years, experimental research has continued to accumulate, leading to the discovery of a new type of carotenoid contained in seaweed and similar plants called fucoxanthin. Fucoxanthin is a pigment (reddish-brown) contained only in brown algae, a type of pigment called a carotenoid, similar to vitamin A and β-carotene. Although fucoxanthin, like L-fucose (fucoidan), is extracted from seaweed, its characteristics and structure are different. Though only about 1g of L-fucose (fucoidan) can be extracted from 1000g of mozuku, fucoxanthin is a very rare component, only able to be taken from roughly one hundredth of the single gram of L-fucose (fucoidan). According to some forecasts, in the future, fucoxanthin will be seen taking the place of fucoidan as an ingredient in brown algae extract health foods. Fucoxanthin has long attracted attention, but high material costs have prevented it from rapid commercialization. However, due to the efforts of researchers, commercialization of high-purity, high-volume fucoxanthin has been achieved without loss of quality.

Currently, as preventive medicine advances, APONOID has found use by doctors at medical institutions (hospitals) promoting alternative medicine and preventive medicine, and is also reported to have provided numerous clinical results for a variety of ailments. As a product that has undergone clinical testing of each functional component, precise apportionment of effective components, and is easily absorbed, Apoptosis Factor APONOID can be taken with assurance. In addition to being a natural choice when suffering from unpleasant awakening, listlessness, gastrointestinal upset, lack of appetite, or problems such as stress and insomnia, taking APONOID is said to provide amazing sensations even for individuals afflicted with serious lifestyle-related diseases or similar. APONOID delivers 591mg of super-concentrated fucoxanthin content per 100g, unsurpassed as the highest content domestically.

The cells of all living things, including we humans, contain genes that instruct the cells themselves to self-destruct/break down. Apoptosis refers to cells receiving these instructions and committing suicide. When the various cells produced by each system of the body have accomplished the specific roles for which they are responsible, over the course of months or years, old cells die, and are metabolized into new cells. Thanks to this biological mechanism, our human bodies are always kept fresh. Apoptosis Factor APONOID helps induce apoptosis on the cancerous cells in human body.