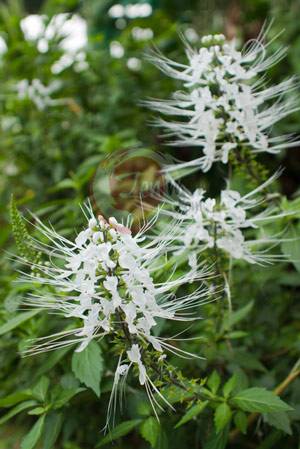 A plant in the mint family with the adorable alias, "cat's whiskers". It reaches 25–60cm in height, and produces attractive white and lavender blossoms around February and April in Okinawa. Native to Southeast Asia, it is said to have entered the Ryukyu Kingdom during the Age of Commerce, from the end of the 14th century to the start of the 15th century. Full-scale cultivation began around 1963, reportedly beginning with importation from Indonesia. The leaves or entire plant are made into a tea and consumed, and the considerable 2150mg of potassium per approximately 100g of tea is said to have a diuretic effect, which acts upon the kidneys and blood pressure. For this reason, it is considered effective for the amelioration of conditions such as nephritis, kidney stones, cystitis, gout, and diabetes. Kumis kucin tea has also long been consumed in Europe, and is said to have been recognized as an effective medicinal plant for the treatment of bladder disease particularly in the Netherlands and France. It enjoys strong popularity in Okinawa, and is widely commercially available as tea. 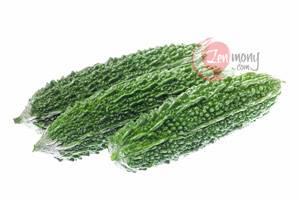 Known in Japanese as "nigauri" or "tsurureishi". It is an annual climbing plant of the Cucurbitaceae family native to tropical Asia, predominantly India. It is monoecious, and is in season from May to August. In China, it has long been popular as a medicinal plant, known for its effectiveness in treating conditions such as high blood pressure and diabetes. In Okinawa, it is a widely used vegetable for relief from summer heat fatigue. Once upon a time, the garden of every home had a goya trellis covered with yellow flowers in the summer, one of the charms of summertime in Okinawa. Cooling oneself off beneath it was said to give great relief from the summer heat. Goya is indeed a wonder, having by far the most vitamin C of any vegetable, very little of which is lost when heated, and its carotene is well absorbed by stir-frying. It also contains a good balance of minerals, including potassium, iron, and calcium. It is considered an ideal vegetable for supplementing vitamins and minerals lost due to perspiration in the hot season. In recent years, a large number of bioactive agents (including saponins, charantin, momordicin, adenine, and citrulline) have been confirmed in the flesh and seeds. These substances have clearly demonstrated a variety of pharmacological effects, including hypoglycemic action, antioxidant action, and inhibition of the onset of AIDS. One notable example of goya cooking is goya chanpuru. It is prepared by slicing goya and stir-frying it quickly, adding tofu, then seasoning the dish simply with salt and dried bonito flakes. Adding egg softens the bitterness. This bitterness is highlighted if Goya is used in salads, sunomono, aemono, nimono, tempura, pickles, western-style or Chinese-style soups, fried rice, or omelets. Goya juice is particularly recommended as a summer beverage for beating the heat. A goya boom has taken hold across the country, but a firm guarantee of continued production along with product research harnessing goya's benefits are desirable to prevent goya's popularity from simply fading with this boom.